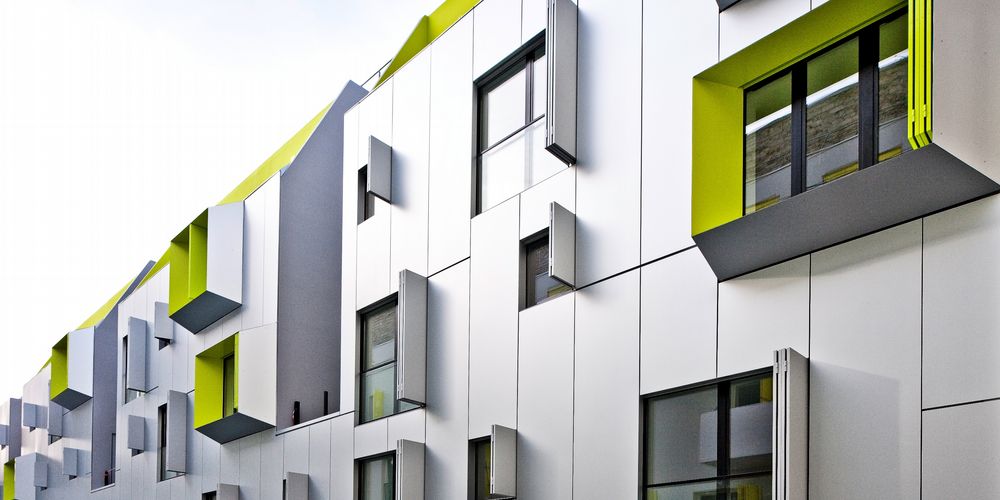 With its sliding bi-fold shutters, Griesser provides an attractive solar shading solution that can be used to design unique building shells.

When closed, the solar shading can give the facade the appearance of a single, smooth surface. When open, the sliding bi-fold shutters can stand proud of the facade as an eye-catcher, or can fold up unobtrusively into the window embrasure like an accordion. The leaves can fold to the left or right or to both sides, offering even greater design flexibility. As a trendy alternative to wing shutters, sliding bi-fold shutters are not just particularly chic, but also save a considerable amount of space. When open, they take up little space on the glass facade.

Our sliding bi-fold shutters can be fitted with a locking latch to prevent burglary. They are characterized by a high level of robustness. The system has passed all the tests for the EC Declaration of Conformity in accordance with the EN 13659 standard, and can even withstand wind speeds of up to 120 km/h, depending on the version. The new, integrated overwinding lock provides additional stability. With a patent pending, this almost invisible solution prevents overwinding in the parked position and guarantees the shutters are securely held. Most elements of the sliding bi-fold shutter system are pre-assembled in the factory, making the solar shading quick and easy to install on the construction site.

You can find more information about sliding bi-fold shutters under this link.